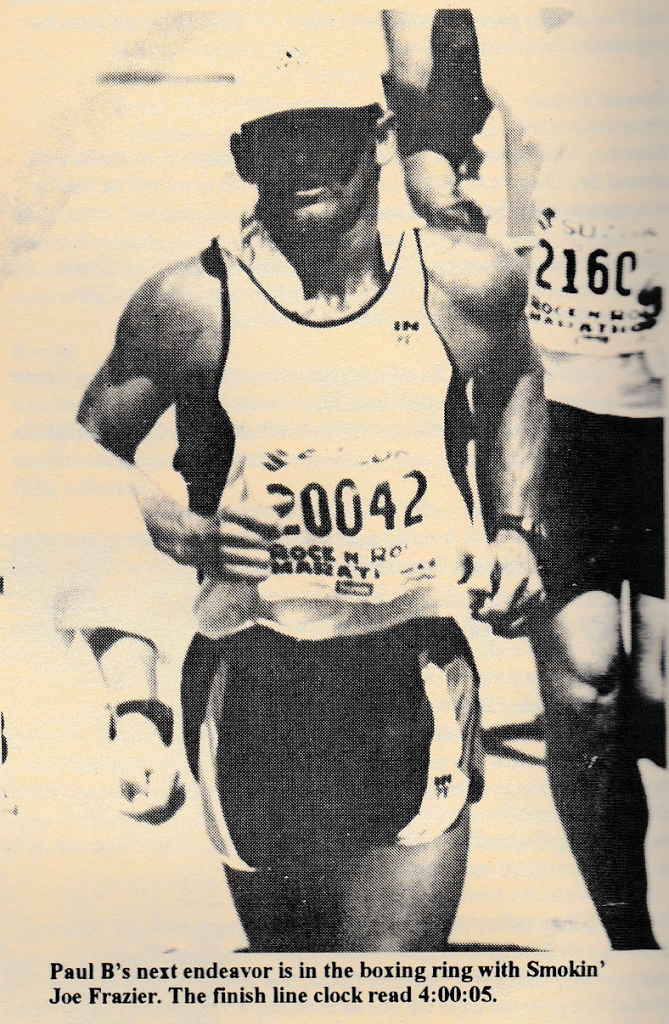 HOW TO SCREW UP A MARATHON
“My Story” 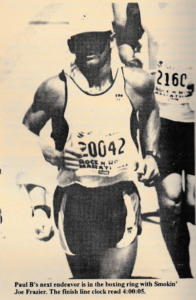 First of all, over train, make this decision early, like in January so your legs are really tired when you get to the long runs in April. Oh, and don’t take that day off when you feel you need it because you must adhere rigidly to the R-N-R schedule Coach Paul Greer has given you. Then as the marathon approaches, don’t take 2 to 3 weeks to taper down. You can do it in say 5-days (like 5 months isn’t enough).
Now it’s 2-days before the marathon & I’m thinking how in the heck can these legs go from tired to fresh? Having limited options, I go for a massage with Margaret Gregory (wow, that counts as good advice) that gave me what felt like an extra day off. So when I arrive on race day I actually felt pretty good.
At 5:45 we all assembled by 6th and Laurel for our last pre-race picture and instructions from Coach Paul Greer. Of course I go to check my bag quickly at the UPS truck #2 which ends up being the next to farthest away truck so I miss the picture. It’s 1-hour before race-time & Ernie Mendez approaches Dan Trone and I about taking over his 3:10 pace group leader job he acquired from Runner’s World, that he had been trying to delegate away since he got the job at the expo. Now Paul Greer has said if you can run a 3:10 marathon then add ½ hour to that time and then you can safely assume that you would be able to lead that group of runners (3:40 marathon time) and survive in the lead position from the start to finish. Well Dan Trone was smart enough to repeatedly say no to Ernie. On my best day I probably couldn’t do a 3:10 even if the weather co-operated. But I figured I was shooting for a 3:10 that day so volunteering for that responsibility, I could somehow will myself to stay on pace. Ha Ha.
As I headed to the 1st corral with the big cardboard sign, strangely I noticed my friends drifting away until, positioned inside the 1stcorral, I was now all alone with mysign. It didn’t take long before runners I didn’t know started collecting around me, quizzing me on race strategy. Soon, the race announcer is pointing me out & I’m realizing I’m not going to get any stretching done holding that sign up.
Luckily I notice fellow track club member Paul Grinberg standing near me. He has the mile splits for a 3:10 marathon on his wrist band. So I tell the group around us if I go down they now have a back up … Paul. The mile splits for a 3:10 marathon are 7:15 per mile. The 1st2 miles we are exactly on pace so I make the decision to stick with Paul Grinberg’s pace. The next 2 miles (3&4) being down Park Boulevard we can’t seem to hold back so now we are going 6:55 miles. My legs are not feeling good & I’m expressing this to my group as we approach the 1st medical aid tent. I pulled off the course to get some tape on my left calf to give it support because it felt like it was gonna pull. There are 12 guys in red shirts standing there holding Popsicle sticks with Vaseline on the ends. I yell as I’m coming in that I need some tape. I waste about 10 seconds as the workers stare at each other unprepared for their first customer. I can’t wait any longer so I left unsatisfied. Now I have to run hard to catch up to the group. 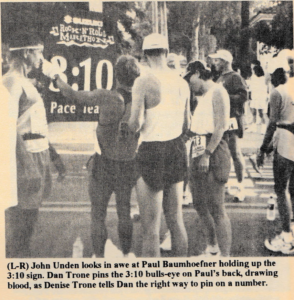 About now, we are leaving downtown heading uphill on highway 163. My intention had been not to push the pace until we reached the 10-mile mark at Friars Road. But the next medical station I had the same problem. A bunch of guys in red shirts with Vaseline Popsicle sticks, with a great view of the race. Someone finally located the tape in a box, as he is unsealing the plastic bag, I announced again it’s too late I gotta catch up to my group. Again I’m pushing the pace uphill all the way to Friars Road. I never did catch up to them, but by the time I got to Friars Road I was weary & stopped at a medical tent. This time I saw the tape & wrapped my left calf myself.
Pushing on by myself I quickly found SDTC Pretender John Unden who I knew to be fast & I thought I could tandem up with him & still make it as we were actually ahead of pace (another bad signal).
Along the river before the course heads around Ingraham St, my running partner Dan Trone pulls up alongside me and announces, “I’m toast”. So I admitted I’m fading as well & my legs are shot. Meanwhile, I’m trying to stay on pace. That was the last I saw of him. I tried to keep my pace but about a mile later on Crown Point, I also started to fall off the pace. Mile 15, I was starting to sense that I had made a mess out of my 3rd R-N-R. Then at about mile 17 Jayne Garrett’s mom (Anne) was positioned with run bags full of personal items. Some of us had pre-packed these bags & given them to her to assist our attempts at personal record times that we all envisioned. Like a champ, she had her arm extended (I still question how she spotted me). She was holding my chocolate GU & my Stop the Pain spray out as I was coming by. Now that’s a prepared aid station worker. Maybe I owe her a red shirt.
All race long I had been dreaming that the spray would cure my legs if I could just hold on till mile 17. Well maybe in retrospect I shouldn’t have relied on an instant recovery solution. It didn’t work as you can guess. But, alas at 17 ½ miles down the course, my old training partner Jayne Garrett pulls up beside me.
Funny, at mile 1, I passed her. I was too good to run with her then. I was busy pacing a bunch of 3:10 marathoners. Well, she offers words of encouragement & continues off into the distance ahead of me like the Energizer Bunny. Now it’s mile 18, I’ve eaten 5 GU’s, 1 Cliff Bar, 18 Ultimas& poured that many waters down my throat & over my head. My shoes are wet, my legs are tapped & hurting & now I’m feeling worn out. My 7:15 mile pace that I held for the first 14 miles is now increasing 30 seconds per mile. Folks, this is called hitting the wall. Something I seem to be able to recreate every year at R-N-R.
Well, shortly after Jayne went by I pulled over to the side of the road. I really had a huge cramp in my right calf. Thus I tore my 3:10 sign off my back. I wasn’t giving up on finishing, but I couldn’t endure 8 more miles, with the thought people would be laughing at road-kill, with poorly thought out goals. I backed off a lot, all the way down Morena Blvd. I had to walk, there was nothing I could do and my attitude was in need of correction. At this point, I quit keeping mile splits on my watch. At mile 20, I spotted another medical aid station. I wasn’t so cocky this time with the volunteers. Meekly, I presented myself to them face down on a cot. One aid iced my legs as the other aid took down my personal info on the clipboard. I didn’t care how long it took. I wasn’t going for a 3:10 any longer I was going for the finisher’s medal now. Demoralized I got back up onto my feet after several more cramps & now both calves were taped. I headed back onto Morena Blvd. I alternated walking and running as my mind & body fought to stay in the race. As I walked, spectators would offer words of encouragement that earlier I never heard. Now, I was at a pedestrian pace. 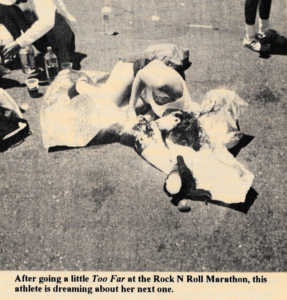 The last 6-miles 1,000’s of runners were pouring past me. At mile 21, I found an aid station handing out beer! About now I was willing to try anything to shock my body into running again. Refreshed from the beer, I headed back on the course again. At mile 22, I guess you all ran into the megaphone wielding coach there. So now I’ve got Paul Greerintroducing me to the crowd. Yelling, “great job Paul from SDTC, your gonna make it” or something positive like that. But just the same I wasn’t really looking well enough for the spotlight intro to the crowd. Around the corner, at the San Diego Track Club water station I had people waiting to run me to the finish line. I won’t bore you with anymore details except that Joe Crosswhite & Margaret pushed me along the last 4-miles. But when they left me on my own in the finish chute I collapsed 100 ft from the finish line. I could hear the PA announcer calling out, “for those who wanted to break 4 hours, you have 2 mins” As I lay on my butt trying to clear another leg cram, a race official was asking if I want to finish & if I wanted to lean on him. I only wished to clear that cramp at the moment.
At 30-seconds till 4 hours I righted myself and, oblivious to the crowd noise, I started picking up speed till I felt I was moving at a pretty good clip. As for the excitement of finishing before the clock ticked 4 hours. I noticed everyone in front of me had made it! Then I crossed the finish line in 4:00:05. My claim to fame in R-N-R 2000, I WAS THE 1ST RUNNER NOT TO BREAK 4 HOURS!
Marathons require endurance, pacing consistency & intelligence. Nowhere does the word speed appear in that statement. Times of my training partners: Jayne Garrett 3:18, Karen Johnson 3:22, Sally Rogers 3:23, Paul Baum 4:00, Dan Trone 4:13.
Ernie, next year when you want to make a pace-group-leader switch at the last minute, I suggest you pick a woman. They’ve got some game, too. Some other advice toward no one in particular: work with others in the Club; don’t just isolate yourself with the schedule & a clock. You won’t get there on time and you probably won’t be having as much fun, along the way. The marathon is a long athletic endeavor and let me assure you the rabbit doesn’t always win, unless you happen to be Kenyan.
Next year I’m going to take Jayne’s advice (3:18 marathoner, 2nd in her age group) I’m sacrificing speed for consistency & going back to training & racing pace smart with the SDTC R-N-R training group.
Oh and Dan I’ve got you 4 races to 3, next one’s yours!
~~~~~~~~~~~~~~~~~~~~~~~~~~~~~~~~~~~~~~~~~~~~~~~~~~~~~~~~
If you would like to read the scanned original article, it is available here. 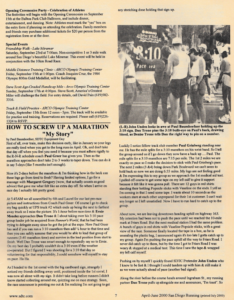 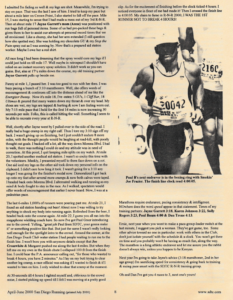 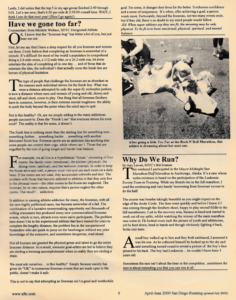