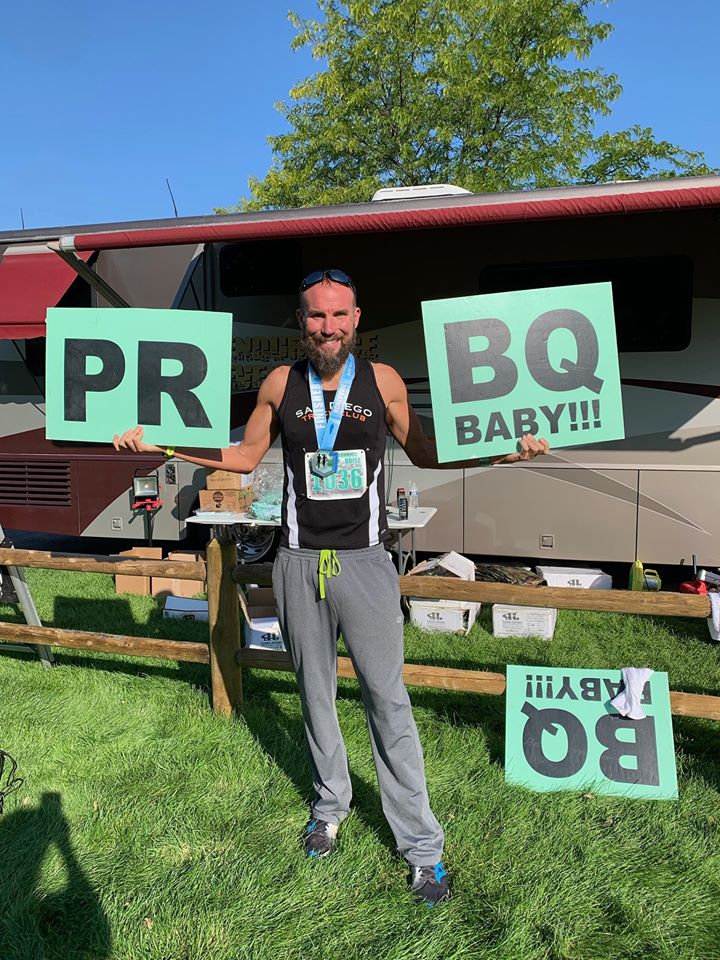 My name is Ernest (Ernie) Remillard, most of you know me as the tall guy with the beard, but I am also a proud father and I am honored to be the Principal of Mission Bay High School. I started running with the Track Club in 2014 after my daughter was born. I trained with the Rock ‘n’ Runnin group for a few years, met some amazing runners, and had good marathons. But I wasn’t able to hit previous finish time on the Rock ‘n’ Roll San Diego course or my desired goals. So I took a couple years off from running marathons and from running with the Track Club, but for 2019 I recommitted myself. I felt great running all winter into spring, I followed Coach Matthew’s training plan, with a few additional workouts. I competed in Ironman 70.3 Oceanside in April (I had my best race ever), I was feeling good, but still had the fear of the San Diego course. I had never run the latest version of the course and had heard the stories of the 163.

In March, I had received an email or received a Facebook ad about the 2019 Jack & Jill Marathon on September 15 in Boise, Idaho. I normally complete a race during the start of the school year (Ventura Marathon, Superfrog Half Ironman), and this was marketed as a fast downhill and last opportunity to qualify for the Boston Marathon. With the fear of the 163 looming, I signed up. I had never been to Boise and I figured it was either going to be an opportunity to qualify for Boston or I made my time in June and the race would just be fun. I had a good first half of the Rock ‘n’ Roll Marathon, but my legs got tired around mile 15. I finished with a 3:15, which is great, but it was 10 minutes more than my BQ time. Boise was now an opportunity to Boston Qualify.

Throughout the summer I trained consistently, for the first time with the Track Club I went to the Tuesday night workouts in Balboa Park and also met up for the Saturday workouts. All summer my mileage was up, and I balanced my running with swimming and biking. In August, I raced in the Chula Vista Challenge, another Half Ironman. My training was going great, I was feeling great. I knew I was going to Boise in September, but I knew nothing about Boise, or quite honestly the course I was about to run. During our training over the summer, I would tell people, “The race is in Boise and it is downhill.” That is all I knew, I did not know the elevation drop…about 4000 feet, and I knew nothing about Boise. I got on the plane a couple days before the race going to a new city knowing I was going to run on Sunday morning. I was traveling solo, and although Rashad had told me other people from the Track Club were running the race, I had never met them.

Boise was amazing!!!! The city was beautiful. The people were great. Restaurants everywhere. Awesome running along the Greenbelt. I was even out for a pre-race training run and the security at Boise State allowed me to step onto the Smurf Turf at Albertsons Stadium. The city was completely walkable and I went to a Street Fair on Friday evening. It was recommend by some people at my hotel to go up to the top of the mountain where the race starts, so I took an Uber up to the top of the mountain. I spent the afternoon hanging out, walking around Bogus Basin, and taking the ski lift up to a higher part of the mountain to check out the views. What the Uber driver didn’t tell me was there are not any Ubers to take you back down the mountain. But a couple of nice college kids gave me a ride back down.

Then it was Sunday morning, race day. It was four in the morning and I boarded a bus, going back to the top of Bogus Basin, about 18 miles up on a school bus. On a super windy road, with no lights. This was definitely the scarcest part of my trip. At the top, there was one light in an open parking lot with about 20 porta-potties, and about a hundred runners crammed into a small ski lodge with restrooms. We were all just trying to stay warm and waiting for the start of the race.  Then all 300 hundred of us toed the line for the start of the race and the announcer with a small boom box played the national anthem and we were off. Oh yeah, it was so dark at the start of the race, they were handing out flashlights.

In the dark, we took off down the mountain, 18 miles of turns. After about an hour, I was able to leave my flashlight at one the aid stations and I could now see the course surrounded by mountains. It was amazingly beautiful! As I went down the hill, I found a pack of younger guys who were running around a 6:30 minute mile. I just tried to keep up. The course was mostly downhill with four small climbs, the longest just less than a half mile. Overall, I was running great I was able to keep the 6:30 pace as I got onto the flat at the end of the course. I knew I had banked a few minutes toward my goal of 3:00, but in my head, I was concerned about “the wall.” But I kept my legs moving. The pack of younger guys had gone from three to one, so I just tried to stay on his tail. Around mile 20, the course was not well marked, so at this point my hope was that I was going in the right direction. Then I got onto the Greenbelt where I had run in the days before, and I knew I was getting close to the finish. At one point I could hear the announcer at the finish.

I started to see half marathon runners, and I had learned from Coach Matthew in the spring…he had told me, “Go get three.” I kept running trying to pass three of the half marathon runners, then three more. I was getting closer and closer to the end. I made the final turn around and knew the last mile and a half would get me close to my goal. Although my Garmin told me I was at 26.5 miles, I crossed the finish line at 2:59:14. I was the seventh runner overall and third in my age group.

After the race, Leslie-Jean Sanchez came up to me and told me she was in the Track Club. (I was wearing my singlet). She and I then spent the morning celebrating with some new friends from New York and talking about the course and future races. I can’t thank Leslie enough for her support after the race, it was so nice to have a Track Club friend to celebrate my Boston Qualifying time and new Personal Best! I have so much gratitude for the San Diego Track Club, its coaches, and members. I couldn’t have reached my goals without this incredible team. 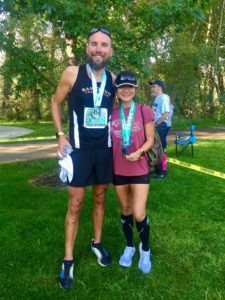