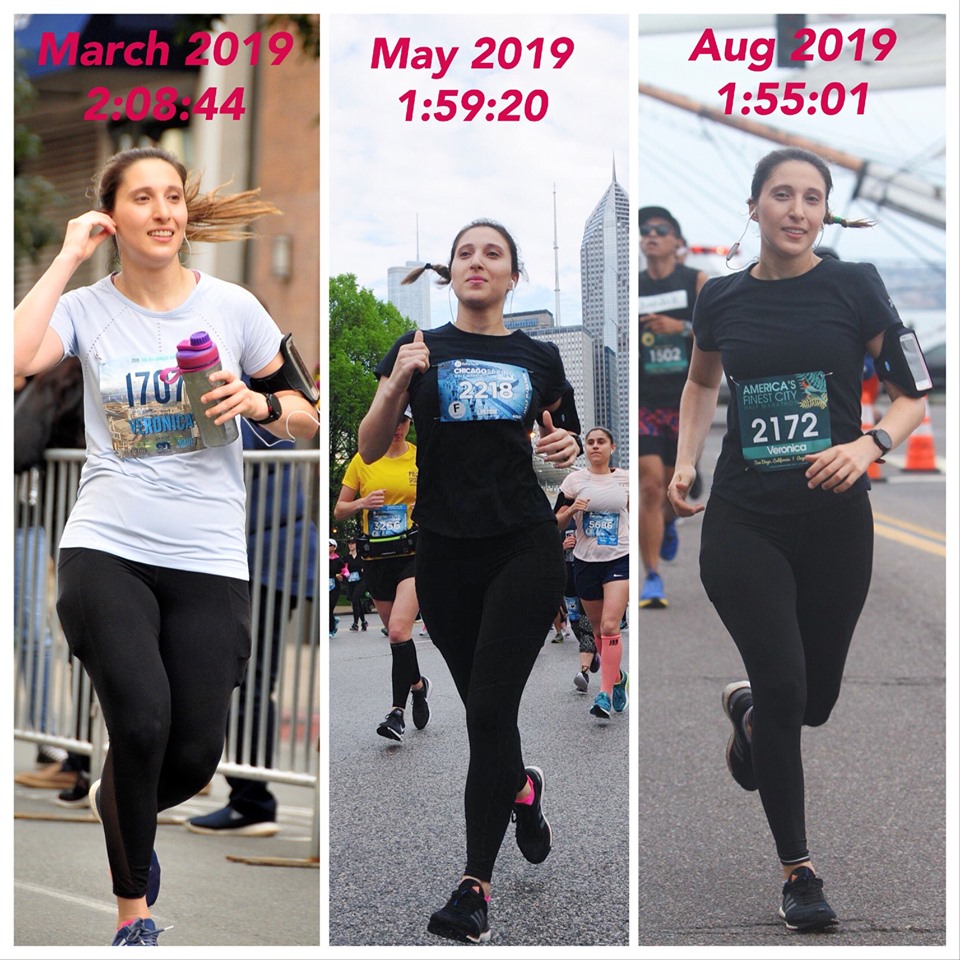 I started running in 2012 as a neighborhood jogger who would run a couple of days a week. In 2018 I decided to take my running routine to another level so I bought a Garmin running watch and I signed up to run my first half marathon race, the San Diego Half Marathon in March 2019. Right before my first half marathon, I joined the San Diego Track Club and started attending the Tuesday workouts at the Balboa Stadium. I ran the San Diego Half Marathon in 2:08:44 and struggled to run up the Washington Ave hill in Mission Hills. However, I still had an amazing experience participating in a race, so I decided to start training for a second half marathon race, the Chicago Spring Half Marathon in May 2019. I joined the SDTC’s Rockin n’ Runnin program and asked for a mentor. Megan Graff, who was training to run the Boston Marathon in April, was assigned to help me achieve my goals. She emphasized that I should run easy miles for most of my training to build a strong running foundation, and focus on speed on specific weekly workouts. I followed the training plan offered with the Rockin n’ Runnnin Program and followed Megan’s tips on my training. My goal for my second half marathon was to run a sub-2 hour race, which I achieved by running it in 1:59:20 under weird weather conditions in a flat course in Chicago. I was happy with my progress and I was determined to continue to train hard and challenge myself to run other races avoiding injury and overtraining as much as I could. Since I had success following the SDTC’s training programs, I decided to join the Half Mad program and sign up for a third half marathon race, the America’s Finest City Half Marathon in San Diego in August 2019 in which my goal was to run a race in 1:55.

The America’s Finest City Half Marathon was different than the previous races I’ve had run. I had to wake up at 3:30am and take a shuttle to Cabrillo National Monument to start the race around 6:15am. I wasn’t feeling motivated because I had been laid off from work 3 days before the race. Despite the unfortunate events, I was determined to try my best to reach my goal. My mantras for the race were: “I can do whatever I focus on with success” and “Grit, Veronica, grit”.  I knew that a strong mentality was really important when running for performance, so I tried to keep myself focused during the entire race.  The weather was overcast and not too hot for a summer race, I  had no pain, no leg cramps, and the downhill miles were in the beginning, which gave me advantage to speed up and be able to relax a little bit when I got to the 6th Avenue massive hill at mile 12. I couldn’t run the entire hill in one go, so I knew I could walk a little and still get a half marathon personal best. What I didn’t know was that my pacing was so spot on: my official time was 1:55:01 @ 8:46 min/mile.

After signing up to run half marathons, I realized the importance of consistent training and of setting achievable goals. My next goal for the half marathon is to run a race in 1:50:xx. For the year of 2020, I would like to train for my first marathon and prove myself that I can achieve goals that previously seemed unattainable.