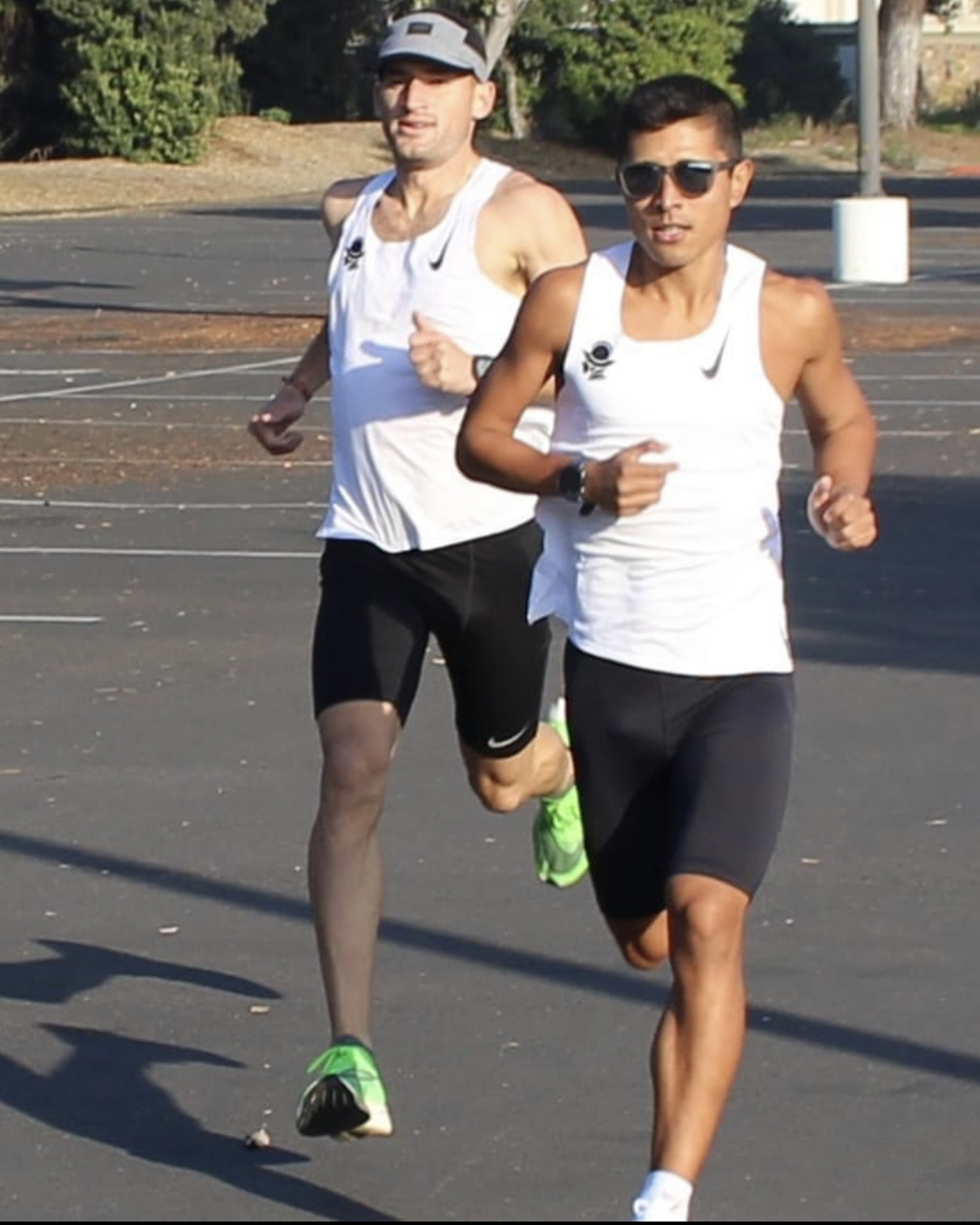 Dylan Marx flew out from San Diego to meet fellow SDTC teammate Steven Martinez (currently finishing Grad School in Georgia) in Jacksonville, FL. Both men qualified for the USATF 15k Road Racing Championships held at this year’s Gate River Run in Jacksonville. The race featured some of the best track athletes and marathoners in the United States to compete in a seldom tested distance, 15 kilometers.

Marx and Martinez were following up a tremendously successful last couple of years which found them competing and placing well at the US Marathon Olympic Trials in February 2020(35th and 57th respectively).

Race day started with an early wake up call, amidst all the pandemic logistics, all athletes were required to submit negative covid tests and wear face masks at all times on the trip while not running. Race morning was no exception. As we left the hotel we quickly noticed the strong winds and occasional gusts on top of that. As we shuttled to the start line Steven and I discussed the potential for the race to turn tactical. With all the prize money and prestige on the line, a top 10 finish meant some sort of payday. As we warmed up, we realized that buildings and structures were going to be the only relief from the forces of nature. The warm up went well and we were all set for the gun-time! Realizing that the privilege of being in the elite field kept us far away from the crowds of participants was not taken for granted.

The way this race is setup, the men and women are able to compete against eachother; with a 6 minute equalizer to allow for a roughly even shot at the $5000 bonus and bragging rights. 6 minutes after the women’s elite field was started the men’s gun went off and we stormed out of the corral. A large pack started forming with most of the field holding on to the 4:38 early pace. One man took to the front and opened a 150m gap on the field, but nobody was worried, or willing to chase him into the wind at least.

Steven and myself kept in touch for the first few miles, working together and keeping track of eachother amongst the 30 other guys in the lead pack. We had the typical jostling for positions that goes on with most races and even some near-falls on the tight turns of Downtown. We both went through the 5k mark in 14:40s and were comfortable and in great positioning. As I closed a small gap on Steven around mile 4 or 5 I was stoked to be able to rally with him and start picking off the 30 or so guys that were making a critical move in front of us. Unfortunately this wasn’t Steven’s day and he suffered a tough stomach issue which we’ve yet to understand.

I charged on hoping Steven would be close in tow; crossing the 10k mark in 29:36. With each turn of the course and a small gap to the string of runners in front of me I methodically caught and passed about 5 or 6 runners in the next 3 miles, including 2016 Olympian Hassan Mead(10k).

The next part of the course was absolutely brutal! We reached the Hart Bridge, which climbed for about 1200m into a relentless 40+ mph crosswind. On the climb I reeled in a couple more runners and duked it out on the decent, dropping one of my competitors with 600m to go.

The time was not what any of us had hoped for jut I crossed the line in 45:17! A bit off of the early pace we had set, but considering the wind and final behemoth of a bridge(the race refers to as “The Green Monster”) it was nothing to hang my head about. Looking around for a sign of Overall placement in the race, I finally found I had taken 21st, my highest national placement yet! In the most loaded field the race had ever put together too!

21st in the United States! Not bad for how I had been feeling coming into the race. I had a tough couple of weeks leading into the race. I wasn’t able to get in some of my typical “key workouts” like I hoped; I received my first dose of the Moderna vaccine just 9 days before the race, throwing off most of the following week of training. My confidence going in was seriously lacking, but as the saying goes, “fake it till you make it”.

The confidence going into the race really hindered me as those strong moves were made at the mid point and I let a perfect pack gap me only to realize that I certainly could have ran well with that group. I certainly will take all of this into consideration and approach these upcoming races knowing I can run with the other top elites.

Steven had a good rally over the second half of the race to take home 29th overall.

Marx plans to follow up this successful road racing season with some shorter track races as he eyes some Spring 5ks and 10ks to chase more Olympic Trials Standards.