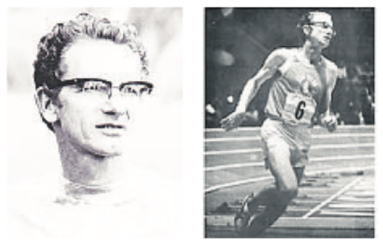 As another great Rockin’ ‘n’ Runnin’ season comes to a close, we reflect back on a man who helped pave the way for San Diego Track Club to grow and thrive.

William “Bill” Gookin was born on September 22, 1932 and by the time he attended Carlsbad High School, Bill was a top track runner and he continued to excel on the Track and Field and Cross Country teams at San Diego State University where he was one of the fastest two-milers in the nation.

After finishing college, Bill joined some of his teammates in forming the San Diego Track and Field association, which eventually became the San Diego Track Club. He served as club president many times and established the first long distance running events in San Diego including the Balboa 8 Mile and the Mission Bay Marathon, amongst others. The San Diego indoor games was a global event, featuring olympians from around the world, including the Soviet Union. Bill directed some of the first running events that allowed women entrants.

A jack of all trades, Bill designed the club logos and created the first team uniforms. He was famous for working all night to set up a race course and then jumping in to win the race the next morning.

Chemistry always intrigued Bill and he loved to experiment, and his passions for chemistry and running intersected when Bill devised the ideal beverage for marathoners and other top flight athletes. After subjecting his running buddies to tests and early prototypes, he came up with Gookinaid, an isotonic energy replacement drink. Gookinaid was widely used by the running community under the brand name ERG, and is now marketed as Vitalyte. Vitalyte is used by the US army, mountaineers, and rescue workers as well as divers, runners, tennis players and other sports.

It was because of Bill and many other influential pioneers that SDTC, and the San Diego running community as a whole, became what it is today!