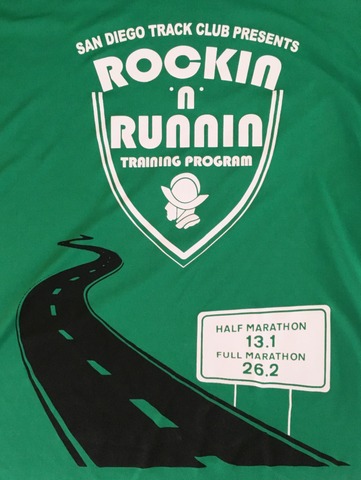 Wow!  That is what went through my head as I turned a corner downtown and heard music, the roar of cheering, and Coach Paul speaking to the crowd through his megaphone, excitedly saying something like, “you did it!” and “you make a difference in my life!”.   How did he get there?  It seemed like I had just seen him in North Park around Mile 8!  Although it felt like the longest finish line ever, with many turns and blocks to go before the actual finish line, it was exhilarating!
My Rockin’ N Runnin’ training journey started the summer before, when a guy came to our Tuesday night Balboa Park evening run with an offer to sign up for the San Diego Rock & Roll marathon or half marathon for $69.  You would even get a free Rock & Roll towel!  I had recently started running with San Diego Track Club (SDTC) regularly and didn’t really know anybody.  I had been running on my own, with an occasional 5K for many years. The idea of doing a half marathon and maybe a marathon a year away piqued my attention.  When Jomel Fampulme said “you can always sign up for the full and drop down to the half later,”  I signed up!  I wasn’t sure I could really do the full marathon, but I had a year to figure it out…
I did the Shamrock Marathon in Virginia Beach in 1994 but had trained on my own.  I had tightness in the right iliotibial band (ITB) while training, but I ignored it.  So in that marathon my ITB completely tightened up at Mile 18, and I ended up having to walk a couple miles.  I was really disappointed and decided that one marathon was enough.  I was worried the same thing would happen again.
I did the SDTC’s Half Mad summer program and the fall Whatever training programs and met some great people. By the time the Rockin & Running program started, early Saturday runs were part of my routine, and I was really enjoying the social aspects of training with a group. 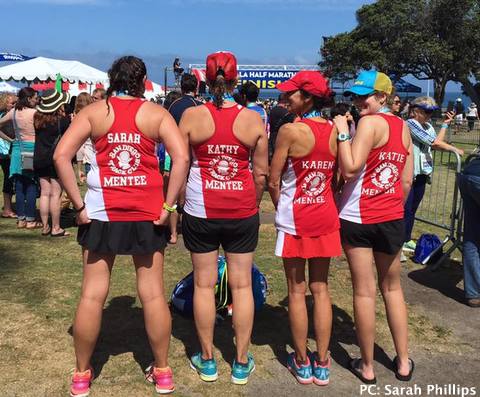 What a great experience the Rockin’ N Runnin’ Training Program was!  I signed up to have a mentor, and it was great to be able to email Tim Dock with questions that came up.   He was  always helpful and encouraging.  I really liked that the training schedule and courses were planned out for us – even warmups.  We just had to show up and (maybe) study the map to see where we were going. There were always cheerful, helpful volunteers at the water stations, which helped a lot. Training with a group was so different than doing long runs by myself!
I had a setback with an acute back injury about a month and a half before the marathon and had to skip several long runs.  I was really worried that my training was over, but I got a ton of support and advice from my fellow runners, my mentor, Robb Latimer the sports massage guy, and the various practitioners from whom I sought treatment.  I was so excited when I felt great in our last long run before the marathon- I was going to be able to do it!
At the Tuesday night workout after the Boston Marathon, it was really inspiring when Coach Paul had the runners line up and share a few words.  They looked so happy!  Same thing after the Mountains 2 Beach Marathon, the week before Rock & Roll.  Their smiles and sense of accomplishment stuck with me – I would (maybe?) feel this way in a week after Rock & Roll! 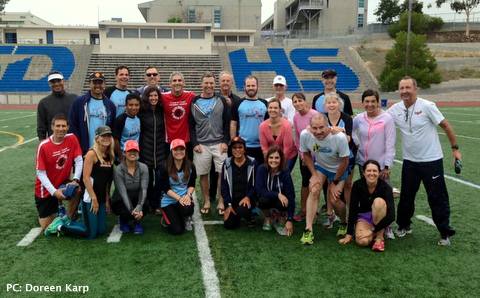 The Friday night spaghetti dinner was a great way to end the training program – food, fellowship, and speakers.  Coach Paul reminded us that less than 1% of the population could and would do what we were about to do.  I drove the course the next morning to prepare myself mentally.  I was ready!
Race morning I had everything lined up and ready to go, but when I got to my car at 4:30 am it wouldn’t start!  I didn’t panic and caught a ride with my neighbors, who I knew were going.  They were in a much later corral, so I ended up barely making it to the start in time to check a bag and go to the bathroom.  I squeezed into the corral, and only a few minutes later,  the gun went off and we started!  I got into a groove, using the advice I had received about not starting out too fast.  My mentor, Tim, had told me to break the race into segments and only think about the segment I was on.  That was great advice!  I broke the course into 9 mile segments.  The first segment was great – North Park, Hillcrest, and Mission Hills – so many enthusiastic people in the neighborhoods!  There seemed to be SDTC people everywhere also, cheering, and I even saw Doreen Karp snapping photos of all of us!
The part that I called segment 2 was tough mentally – Morena Blvd, Mission Bay, Friars Road – long, flat, not exciting.  Someone had a sign that said “if you aren’t fainting or dead, keep running”.  Although I was never really tempted to walk, I kept that in my head the rest of the race. 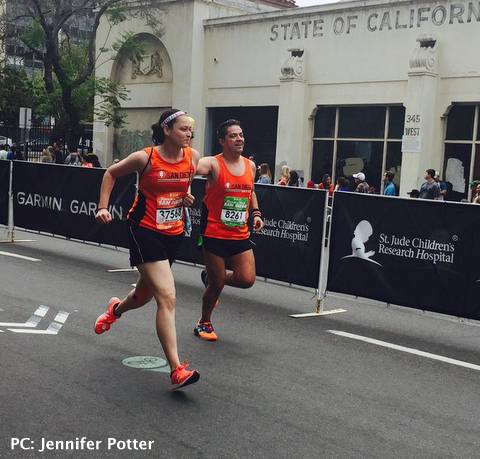 We had heard from several speakers about the mental aspects of the marathon.  One said that the marathon is 50% physical and 90% mental – huh?  Anyway, the previous day I got a bunch of motivating messages from people who had done Mountains to Beach, including “you are strong” and “you got this”.  I had these in my head like a mantra, repeating them to myself.  I had made a pace band that I laminated, and I was three minutes ahead of my goal pace for a 3:50 finish.  I was feeling great!
Then I got to Segment 3, which included the 163 freeway, starting at Mile 21.  I expected it to be hard, but it was so much harder than I expected.  I feel pretty strong on hills normally, but I got really discouraged when I saw the pace on my watch.  Somewhere near the worst part of the 163 I saw Jacob Fischer and his brother Nate Romero from SDTC.  Seeing them gave me a boost to push the rest of the way.
The part after the 163 was a blur.  I honestly don’t remember anything until I got to the part where I could hear the crowds.  I didn’t meet my goal of 3:50, but I was very happy to end up with 3:52:01  – a PR and a qualifying time for Boston!  I know that I could not have done this without all the support of SDTC.  I had fun and have met so many great people.  I’m happy to be doing the Half Mad and Whatever training programs again, and I am really excited about going to Boston.  It may feel corny when Coach Paul tells us to tell the person next to us that they make a difference in your life, but the SDTC people really do! 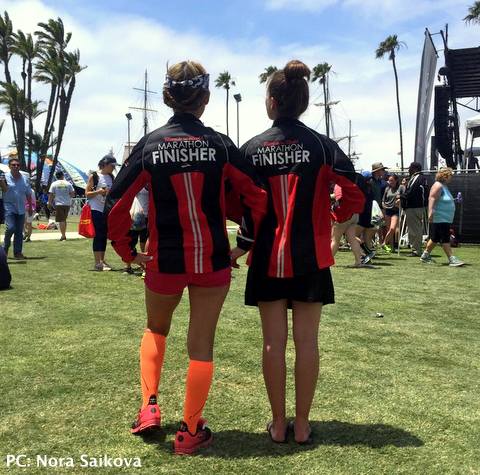