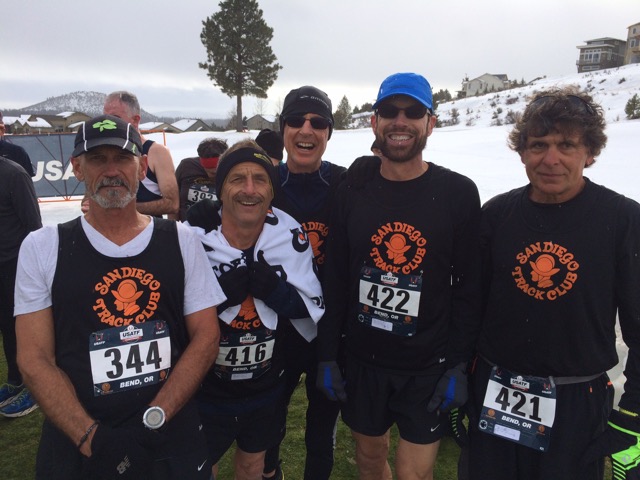 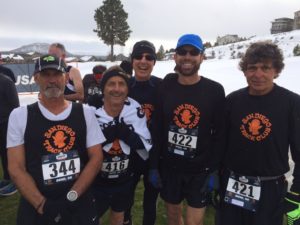 The race turned out to be a race of attrition, both before the race and on the course. We started with (7) runners and with a maximum of (5) runners per team (3 score), we had a SDTC “A” team and “B” team. Unfortunately, two weeks before the leaving, Gary Blume pulled a hamstring muscle and was unable to make the trip. Three days before, Jack Nashcame down with the flu. Finally, on the way to Bend, Hugh Molesworth’s flight was cancelled due to snow and he never made it to Bend.

So our intrepid travelers, now down to (5), began to arrive in Oregon. Greg Wilson and Greg Wagner arrived Thursday evening just as the snowstorm hit the area. After 40 minutes of trying to find a ride, they discovered a taxi driver willing to drive through the snow 18 miles to town. Incidentally, he turned out to have an encyclopedic knowledge of all things NFL and gave a player by player preview of the Super Bowl. 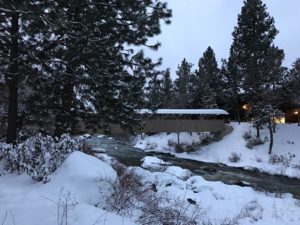 The next morning the Gregs found their way through 20″ of snow and a balmy 17 degrees to the course for a preview run. There were crews with snow blowers and shovels trying to clear the course. We ran the course on about 6″ of frozen, slippery snow and then retreated over the bridge crossing the Deschutes River to the Riverhouse Hotel and warmth. After his brain thawed, Greg Wilson decided that his hometown in Maui was warmer, has less snow, and was at a much lower altitude (Bend is about 3700′ elevation and Hana about 78′). No more winter races for him!

Thankfully, it started warming up hour by hour so that by race day it was in the mid 40s. That meant the snow was rapidly melting and the course, while winding through a tunnel of two feet deep snow, became a grassy water slide generously interspersed with deep mud baths. 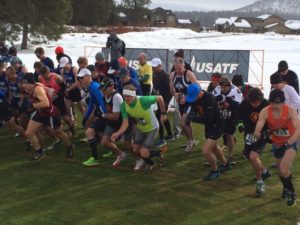 In any event, our remaining five runners bravely faced our 10:45 am start. We lined up in our assigned chute 21 at the farthest left side so that we could enjoy running through the water pond on that side of the field. Those of you who have run the course before know that there is a wide flat start across a grass field that stretches at least 10 or 12 meters before you head straight up a long hill.

From there the course gets steeper, both up and down. It is all hills. But at least it’s at altitude so your lungs hurt worse than your legs. And just for the entertainment of the course marshals, there is a very large tree right in the middle of the first steep downhill. Seriously.  So you either head left into 6″ of shoe sucking mud or you head right to go over ruts and rocks. 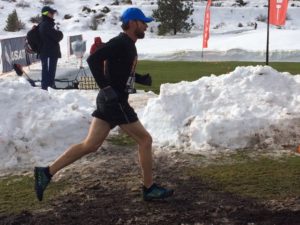 To add to your sense of adventure on the steepest uphill, there are large boulders in between flowing mud that you get to navigate. You can go over or around the boulders while the spectators laugh hysterically. The comedians who designed this course thoughtfully painted the boulders with bright orange spray paint so that when you fall on them you’re sure it was the rocks and not the mud that got you.
Then you repeat that for 4 laps. There were plenty of slips and falls during the race. Not wanting to be left out of the fun, our team captain and fearless leader, Paul Baumhoefner, decided to spike himself in the calf while trying not to fall down a slippery slope. That also gave him the perfect strategic excuse to slow down. In another masterful execution of strategy, two Cal Coast runners, who were holding a lead over Greg Wagnerfor nearly 3 laps, decided to launch themselves headfirst into a well-executed mudslide and slammed into the snow bank. As they continued to roll, one could be heard to yell: “I knew we should have worn spikes!” Meanwhile, Greg astutely recognized that this might be an opportunity to pass the arch-rival Cal Coast runners. 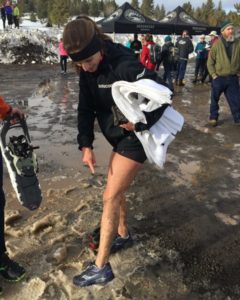 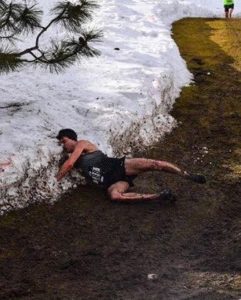 At the end of the slowest (and most exciting) XC race any of us have run, we finished in second place with 11 points to Genesee Valley Harriers who had 10 points and were 12 seconds ahead of us. Sheldon Subbith finished 2nd, Greg Wilson 3rd, and Greg Wagner was 6th. Paul Baumhoefner and Robb Latimer rounded out our SDTC Second Place National Championship Team. We were happy to beat our rivals from Cal Coast who finished in third with 24 points and multiple cuts and bruises.

Post-race, several of us took advantage of the free beer at Deschutes Brewery and the gathering at the first class FootZone running store. Robb and Grace Latimer spent the afternoon snowshoeing. We all met later that evening in the town of Bend which, by the way, is full of great people, great hospitality, and great fun. However, nothing could match Paul’s post race recovery celebration as we learned he had spent the afternoon in the hotel jacuzzi with the UCLA women’s team. Despite his generous offer, they apparently don’t need another coach!

Bend was a great experience and we’ll certainly miss running there when the race moves to Florida next year! 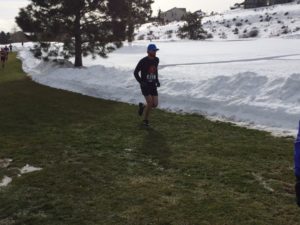